July 07, 2010
It's probably about 12 months till the start of the Big Alps run, which sounds like a very long time, but if the experience of last year's adventures are anything to go by it will pass very quickly! Preperations are progressing well if not earth-shatteringly fast, and Mark Beaumont's willingness to help and generous comments have been great. I've also spoken to Carey at Water for Kids who tells me the charity is still doing well despite all the financial goings-on, which is great news.

In the world of exercise, the summer seems to result in me doing lots of short fast races, which aren't generally what I go for. This is because they are horrible, when you're only racing 15 - 20 minutes every second counts so there can be no holding back. This means pain and gurning across the finish line. In the last month or so I've raced a couple of 5k time trials (current PB is 18:16), and a few great (painful) fell races... Beamsley Beacon, Danesfield Relay and the Cliffhanger fell race stand out. The latter because I should have won, but took a wrong turn around a building in the finish field and lost out by 4 seconds. Ah well.

I've also done a bit more of a slightly less frantic (some of the time at least) sport, sailing with Paul on Wild Spirit (www.wildspirit.biz). I raced Round the Island on one of 1754 boats in the world's biggest yacht race, which was fantastic. It's a really bizarre experience to go up onto the deck and see literally 100s of boats around you, some within a few metres! The week after that I was back on the boat for a race to Weymouth. Sadly this didn't quite go as planned as the wind faded and we were left in a strange perfectly calm area of water, surrounded by fog. It was like skiing in a whiteout, it felt like we were floating through the air. So we went back home and to the pub. 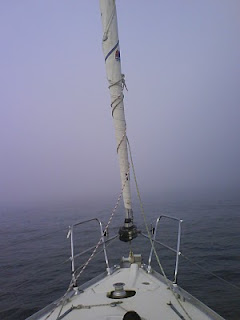 So after all these short races I now need to get ready for the Lakeland 100 in a couple of weeks' time. This has come around very quickly, I thought I had longer. Hmm...